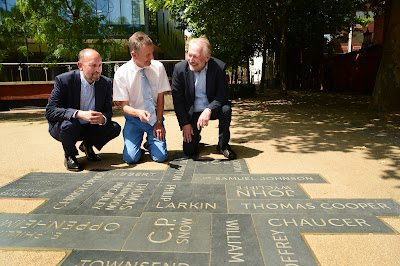 Funded entirely by the Bank,  the Writers' Pavement celebrates the contribution to literature by authors associated with Leicester. It is the latest in a series of public art works organised by the Friends of New Walk Charity. These include the Clicker, the Concerto and the Clothier, all within the vicinity of New Walk, complementing the extensive public investment in Leicester’s streets and spaces this century. Each piece has been backed through generous contributions by local businesses and individuals based in the New Walk area, who are keen to enhance Leicester’s unique traffic free walkway, initially laid out 230 years ago in 1785. (For more information on the Friends of New Walk Charity (See https://www.friendsofnewwalk.com ) With then emergence of electric bikes and scooters this traffic free nature is becoming harder to maintain, but it is still the delightful tree lined perambulation through the heart of the City.

The Writers Pavement has been laid out in granite in the semi-circular space at the northern end of New Walk, in front of the Mattioli Woods office building. Authors celebrated range from the historic, Geoffrey Chaucer, to Joe Orton, Sue Townsend of Adrian Mole fame and C.P. Snow who actually based one of his novels in the New Walk area.

Peter Wilkinson said “I can't thank Cambridge & Counties Bank enough for their commitment to promoting public art in the City and specifically New Walk”. Donald Kerr, CEO Cambridge & Counties Bank, responded “It’s part of our commitment to our home City of Leicester and it’s our pleasure to support the enhancement of the City centre and particularly New Walk where our head office is based."

Posted by Landmark Planning at 10:35 No comments: