Citizen Jane: The battle for the City

Still available for over 3 weeks is this brilliant documentary screened last Monday on i player (BBC 4). I recommend it to everyone.

Like most Planners I had read Jane Jacobs book: "The Death and Life of Great American Cities" at university. Even though it was written well over 50 years ago it is still required reading on planning courses. The book is a critique of 1950s urban planning policy, of tearing down existing houses and tenements and replacing them with high rise developments that have little or no relationship the street. Instead it celebrates  community with layered complexity and seeming chaos in active vibrant streets as the ideal location for human interaction.

The documentary brings all this to life so you really relate to the travails and ultimate successes of Jane as an urban activist in both New York and Toronto.

Of course we have all moved on; 50 years is a long time. Jane's views are now the accepted planning wisdom. The rationalists and the decentralists have been totally discredited. But I just wonder how much have we really learnt. We are still creating grand plans, large ’sustainable urban extensions (SUE), with a monoculture of housing divided by roads and parking. Any different use such as schools and shopping still turn their back on the street.

I asked a student the other day after a university field trip to Upton, Northampton a SUE of up to 15,000 people for his impression. The first thing he said was how lifeless the place was, particularly surprising as it was half-term. I think Jane would still be worried that we still have not got it right.

Jane herself is quoted as defining her three key lessons as:

“A city street equipped to handle strangers, and to make a safety asset, in itself, our of the presence of strangers, as the streets of successful city neighborhoods always do, must have three main qualities: 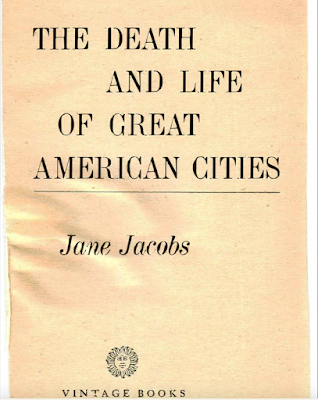 First, there must be a clear demarcation between what is public space and what is private space. Public and private spaces cannot ooze into each other as they do typically in suburban settings or in projects.

Second, there must be eyes upon the street, eyes belonging to those we might call the natural proprietors of the street. The buildings on a street equipped to handle strangers and to insure the safety of both residents and strangers, must be oriented to the street. They cannot turn their backs or blank sides on it and leave it blind.

And third, the sidewalk must have users on it fairly continuously, both to add to the number of effective eyes on the street and to induce the people in buildings along the street to watch the sidewalks in sufficient numbers. Nobody enjoys sitting on a stoop or looking out a window at an empty street. Almost nobody does such a thing. Large numbers of people entertain themselves, off and on, by watching street activity.”
Posted by Landmark Planning at 08:59 No comments: