More Questions that Answers: Devolution is the moment's hot topic.

The airing of the issues proved a major success at a recent RTPI East Midlands conference that I helped organize on Devolution in Leicester.

Pleasingly we managed to attract some big hitters: from this year’s national President of the RTPI to Alberto Costa M.P. for South Leicestershire.

The morning was split into two sessions to consider two separate aspects of devolution: from Central Government to sub regions; and, district planning to neighbourhood planning.

In both cases the general consensus was that it could or should be a good thing.

Ian Morgan a D2N2 Board Member, but also from a medium size group of bus companies very forcibly put over the positive benefits from his own experience. Decisions should always be devolved down to the lowest level of subsidiarity. That is the principle in his company.

While this was very well received by the audience, I just have a nagging feeling in the back of my mind that I would not always agree. The public also needs consistency to be confident of, for example, service quality or the amount of service. You trust and use say Costa Cafés throughout the land, because you know what to expect. The format is micromanaged, so people know what they are getting and feel comfortable, as they are risk adverse in choosing say a café visit.

The same might apply in, for example, neighbourhood planning. Formats, names processes can perhaps best follow standard guidelines.  This gives the public confidence that a rogue plan is not being produced that unfairly benefits one group or individual over another.

The same might be said of a major firm investing in a region wanting to be confident that what it says on the tin in say the West Midlands is the same as in Scotland?

I also found an observation by Alberto Costa MP, with his strong Scottish accent, very illuminating. People see a lot of the drive for regional / sub regional devolution as a result of Scotland’s success in achieving much greater autonomy. What is good for the Scots is good for the rest of UK Plc. However, in some ways at least one can argue that Scotland is the most centralized country in the UK. For example, there is one police force: Police Scotland. And that centralization has led to much less local influence on operational matters by the public and overall effectiveness of the constabulary in his opinion.

I can guess that the cynical among us may feel that this devolution is just a power grab by ambitious and power hungry politicians?

But the overall message is that we are entering a new era. It has a long way to go. It is going to happen anyway, so lets take out time and try and get it right.
Posted by Landmark Planning at 10:29 No comments:

Leicester(shire) has been running a business festival for the last two weeks (to Nov 6th).

There were a whole host of events put together in six months by a collection of County organisations from Leicester University, our Economic Partnership (LLEP) and our local newspaper , the Mercury.

I attended the flagship first day "Summit" and have to say I was very impressed. Three key speakers all gave really insightful views on topics that were either directly or tangentially linked to business. The calibre was high, such that even the M.C. for the day (David Byron) was the former managing director of BMI Baby the low cost carrier bought by the British Airways group. 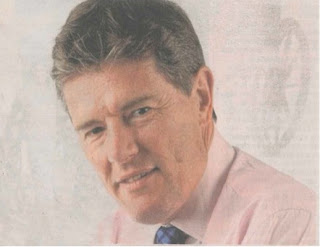 First was David Smith the Economics Editor of the Sunday Times. I had gone to the event really to specifically hear him talk, as I had read his column most Sundays for many years. He gave a generally benign prognosis for the U.K. Economy in the next few years, but I was most interested to hear what he had to say on the forthcoming referendum.

My view is (was?) veering towards the exit, arguing that excessive regulation and cost was detrimental to the U.K.,  while surely we could go alone. Smith opined that regulation was largely here to stay and being in or out would not make much difference. An accommodation on free trade would be struck, if there was a Brexit, as it would be in the best interests of both sides to smooth an exit. However, there were two factors that, on balance, convinced him to stay.

First the uncertainty and disruption would blight our economy for a few years; and, secondly, what makes us believe that we would do well outside. That was the consideration before entering in 1974, which we had rejected,  as our traditional world wide markets (particularly the Commonwealth) were already losing interest in our goods and services. 40 years on, it would not likely to be any better, especially with those partners, such as the commonwealth, who we had turned our back on then. In a totally non polemic way he had me seriously questioning my previous inclinations.

Second and third up were Bonita Harris and Gareth Davies. Equally interesting and persuasive. One spoke about her motivation  to become the youngest British woman at 22 to climb (from a start 2 years before when climbing out of bed was her biggest altitude rush of the day) Mount Everest. Gareth Davies, Chairman of Footsie 100 companies William Hill and Wolseley, gave a much more prosaic review of how to succeed in business  - but nevertheless interesting and illuminating from over 40 years in business.

This Business Festival definitely looks as though it is something whose time has come for the City and County.
Posted by Landmark Planning at 12:00 No comments:

The latest in our bi-annual series of inter-professional events attracted 74 people to this free CPD. Held as usual at the Parcel Yard pub next to Leicester train station for an hour after work, it could be followed by a quick drink and socialize. This is a winning formula for the mixing of the disciplines on a key topic that has relevance for everyone.

As usual two speakers spoke for 15 mins (slightly stretched!) on their personal experience. This time on the trials and tribulations of building homes to high environmental standards.

Peter Conboy of Blueprint described his company’s work over the last nine years providing modern innovative homes in a deprived part of Nottingham, through three iterations of schemes.

Steff Wright of the Gusto Group equally talked in a time series way of his work for over 15 years on the same journey, culminating at present, in a development near Lincoln Showground called “ The Edge”.

What both speakers showed was that (in not necessary propitious locations for values) a significant premium had been achieved. And this could justify the extra costs associated with setting higher standards.

Collectively they agreed that the key lessons were to concentrate on ‘fabric first’; do not focus on eco bling; keep it simple (both in build and subsequent operation); and, attempt to achieve a high thermal mass in the building to minimize the impact of very high or low temperatures outside. Achieving this may mean not satisfying current sometimes simplistic standards (e.g. strict adherence to Passivhaus may limit your ability to provide attractive well lit spaces to take advantage of a northern summer).

What both speakers also agreed was that up scaling these small projects to the mass market (and it is only the mass market that could satisfy Britain’s chronic housing shortage) was a gigantic leap. Their lessons, however, had relevance at the leading edge of research. It also pointed to a much greater need for off site manufacture to simplify, reduce costs and achieve greater quality control.

Posted by Landmark Planning at 09:43 No comments:

Times Up for Pub Conversions?

A new blogger this month to give Peter a rest. I am Alan Siviter a Senior Planner at Landmark Planning.

An interesting article in the Leicester Mercury from Tuesday 8th September 2015, shows another example of ever-changing context of planning and a new added level of difficulty to securing planning permission.  The Western, in Leicester's West End became the first pub in the City to be named an Asset of Community Value (ACV).

The ACV designation means that if the pub were to be sold, the local community would have an opportunity to bid and potentially buy the building.  The ACV designation also has other implications.  The designation makes it much harder to get planning permission to change the use of the site, particularly for buildings in use as public house (A4 Use Class).


In relation to 1, 2 and 3 above PD rights are removed for 5 years beginning on the date the ACV was entered on to the list or until the building is removed from the list.  (Buildings can be re-nominated as an ACV after 5 years).   4 and 5 would now require planning permission.

PLEASE NOTE: the new legislation has provided an added level of protection to pubs.

If reader is seeking to implement PD rights on an A4 use, which isn't nominated or on list, there are still a number of conditions that apply.  These are listed below:

The increased level of protection to public houses was seen as means of deterring retailers from targeting pubs for a change use to local convenience stores such as a Tesco Express or a Sainsbury's Local.  There are many examples of this without the need for planning permission or the need to complete a sequential or impact test.  The new legislation allows the local community opportunity to identify a pub earmarked for development as an ACV.

The legislation is not an outright ban on development it just requires that the development of ACV assets and public houses undergo a greater degree of scrutiny.

Alan Siviter
Posted by Landmark Planning at 10:23 No comments: